Papigo is a village of the prefecture of Ioannina, built on the slopes of Tymfi at an altitude of 960 meters. It is also mentioned as Megalo Papigo and together with the neighboring village of Mikro Papigo is a community of the prefecture of Ioannina. The community has a population of 357, of which 280 live in Papigo and 77 in Mikro Papigo. Papigo is one of the most characteristic examples of Zagorian architecture and the settlement is traditionally proclaimed.

Papigo is very close to the Vikos Gorge and within the Vikos-Aoos National Park. It is surrounded by rich vegetation of deciduous trees, so the area changes colors every season. The area attracts tourists throughout the year. Climate conditions follow the quirky nature of the ecosystem of the national park, with heavy snowfall in winter and humidity in the summer. The flora and fauna of the area is very diverse. The beautiful image of the settlement contributes to the impressive formation of Astraka (the tip of Typhis) with its steep cliffs rising impressively above the settlement, reminding of towers. To the summits of Tymphis and Drakolimni begins a hiking trail from Papigo. The route lasts for a total of 5 hours while in the course of the mountaineering trail, at an altitude of 1950 meters, there is the Tymfi refuge. [3] Famous dots near the settlement are the swimming pools. These are large cavities formed on the rocky bed of the river of Rogovo, which fill water, reminding of swimming pools.

Vikos Gorge is located 30 km northwest of Ioannina and is the deepest gorge in the world. It has a length of 20 km and in many places the depth exceeds 1,000 meters. The tributary of Aoos, Voidomatis, which runs through it, has only seasonal water.

The flora found in the area of the gorge is of a very large variety. A place majestic and enchanting.

Zagorohoria is a network of 46 gorgeous villages, where anyone can find what they are asking for. Villages with life or tranquility, villages with incredible views or villages in the forest.

Forests but also dry peaks, crystal clear rivers like Voidomatis and alpine lakes such as dragonflies. In Zagorohoria the visitor can also admire the traditional architecture of stone and wood, which are the main materials from which the houses were made and still made

The one dracholimni is located in Tymfi, at an altitude of 2050m. It is a bustling mountain destination and is known for its alpine terratus (dragons) that hosts its waters. The lake is 1 hour's walk away from the organized shelter of Astrakas and 4 hours of hiking from Mikro Papingo. Access is only possible on foot.

Kalpaki is 30 km from the city of Ioannina, on the Ioannina - Kozani national road. It has linked its name to the historic NO of 1940. The inhabitants are mainly engaged in agriculture and livestock farming. It is the seat of the municipality of the same name. In the area there were ancient Molossian states that were destroyed in 167 BC. from the Romans (Evrymenes, Elaia, Stympara, Loutka - the later fortified Byzantine state of Vella).

Sightseeing in Kalpaki:
• The War Museum
• The monastery of Vellas 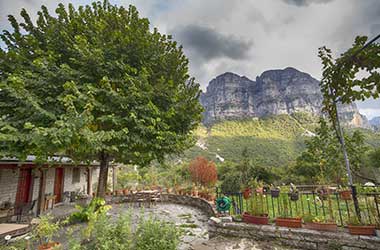 Countless locations and places to visit in our places during your stay.

See here information about all activities from our dedicated website.